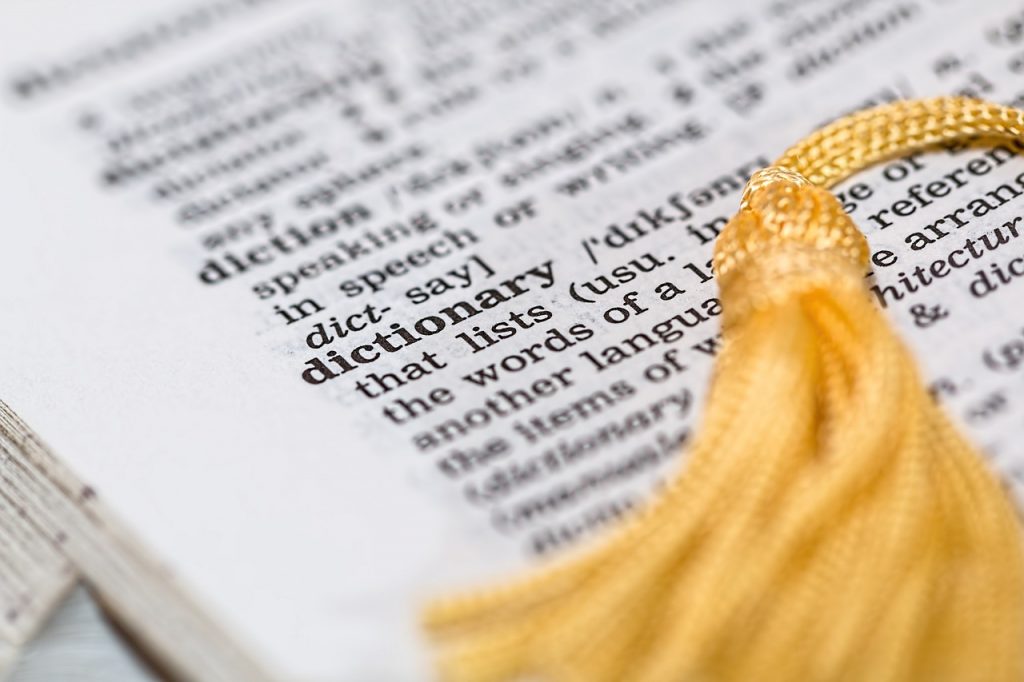 Imagine there are two civilizations living in proximity to each other. Let’s call one the Red People and other the Blue People. You see, they have agreed with one another to live side by side in peace, based on this simple premise: The Red People have a right to all of the things that are red, and the Blue People have a right to own all of the things that are blue. When a red object shows up in the Blue People’s land, it is gladly turned over to the other side, its rightful owners, and vice versa.

One day there appeared an object that was purple. The trouble was, that the Red People did not have a word for purple, and neither did the Blue People. The Red People called the purple object red, and the Blue People called it blue. They tried having diplomatic debates about the true ownership of the purple object, and academic specialties grew out of this one problem. But without the word for purple there could be no resolution. In the end, the peace between the two civilizations ended when they went to war with each other to fight for the purple object, something that they both thought was rightfully theirs.

The specificity of language is very, very important to peace in the world. In theory, it is the job that lawyers do. Also, it is the job of theologians and philosophers. When we can rely on words to have an exact meaning, and when we have a larger quantity of nuanced and specific words that we can agree upon, it is a better and a more communicative world, one that is less likely to have to resort to violence and war.

In fact it is every person’s civic responsibility to improve and expand his or her vocabulary. This not only includes listening to how words are being used in other neighborhoods and by other sub-cultures, but the root origins of words, how they were used historically, and how they relate to similar words that are cognate or share a similar etymology. When we don’t actively improve our vocabulary, as individuals and as a people, we are passively contributing to the potential for violence. Overusing the words “awesome,” “crazy,” or “ridiculous,” or replacing the word “you” with “u” in a text message will have negative consequences as this laziness snowballs into the future.

Much of our lazy language habits in the United States comes from the bombardment of advertising. Advertising marketeers know that they have to reach the widest audience of consumers (you read that right, they are not “people,” they are “consumers”), and so advertisers are only going to use words that the lowest common denominator of people will understand. Their job is to communicate in the most simplified way to the largest quantity of people (rich, poor, educated, uneducated, etc), a positive image of the thing they are selling. Most of us who do not know how to actively listen or really care about active listening start to talk and think in the terms of these advertisers. So the scope and specificity of the words we are in the habit of using becomes smaller and smaller.

Songwriting, like poetry, is not primarily about rational communication. Songwriting has to primarily connect with audiences emotionally. It has to be, simply stated, musical. Instrumental music can be so inspiring and beautiful and point towards God without using words. If you are going to add lyrical words to music, don’t detract from that. Use words to enhance the music with imagery and ideas, but don’t try to cram in philosophical treatises into melodies and song structures where the words don’t fit pleasantly.

I’m going to demonstrate this with an example by a master of the simple acoustic folk song and a master of lyrics. His name is John Prine (r.i.p.), and he is most well-known for some of his songs such as Dear Abby and Paradise, but this particular song comes from his tune I Wish You All The Best.

The narrator of the song (and I don’t always presume that the singer/songwriter is the narrator, who might be a fictional character in the song) is singing to a former love interest, saying he forgives her and wishes her the best, but how difficult that can be. Here’s the verse:

I guess that love – is like a Christmas card
You decorate a tree – you throw it in the yard
It decays and dies – and the snowmen melt
Well, I once knew love – I knew how love felt

The first line is a simile: “Love is like a Christmas card.” However, in the following lines, he abandons this simile to describe how love is like other aspects of the Christmas season. The fact that there is not a rational connection and train of thought from line to line does not matter. John Prine uses the word “card” as a way to rhyme with “yard” in the next line, and it works beautifully. It is simple and makes for a pleasant, enjoyable, and memorable lyric.

It helps that John Prine’s fan base knows that he is often silly and not exact and have come to expect that from him, but even for someone who is new to his songs, his writing is accessible and universal in a great way.

In your songwriting, remember to first be musical. Don’t write anything blatantly evil and mean or words that hurt or harm people, but try to use words in a way that enhances the emotion you are trying to communicate, not in a way that solves a philosophical argument or a Biblical interpretation problem. Leave that up to the professional scholars.